Webmin is a web-based interface for system administration for Unix. Using any modern web browser, you can setup user accounts, Apache, DNS, file sharing and much more.

Due to a code execution vulnerability in the password resetting function of password_change.cgi file, this vulnerability allows a malicious third party to execute malicious code without input validation. Knownsec 404 Team found that this was because of the backdoor implanted in some versions of the installation package and source code.

The official version impated by the vulnerability was Webmin <= 1.920. I used version 1.920 for the test.

In this version, the triggering of the vulnerability requires the password reset function to be enabled. In "Webmin-> Webmin Configuration-> Authentication"` option, we should check the box allowing users to set a new password using the old password.

After Webmin restarts, check the webmin configuration file and you can see that the value of passwd_mode has changed from 0 to 2. Do packet capture at the password modification, and then add |ifconfig to the old parameter.

I found that the command was successfully executed!

I wanted to try another user, but this was what I got.

The root user here is the root user of the Linux system, I do not know why it did not work.

Then I tried with another user.

The user can be empty or webmin, and this is how I create them:

Why is there such a difference? This is about perl scripts and I want to thank @Longofo for his help.

First, in the 12th line of password_change.cgi, we can know we can only trigger the vulnerability when passwd_mode=2, and this means we must enable password resetting. Otherwise it will show Password changing is not enabled!

Then look at the 12th to 31st line of password_change.cgi :

This code mainly determines whether it is webmin user. And it requests an acl-lib.pl, which can known as the functional file by name. The role of 21st~22nd line is to get the user in the request and determine whether it belongs to Webmin user! But why it compares the values of $wuser and x? . So I tried to print out the value of acl::list_users(). 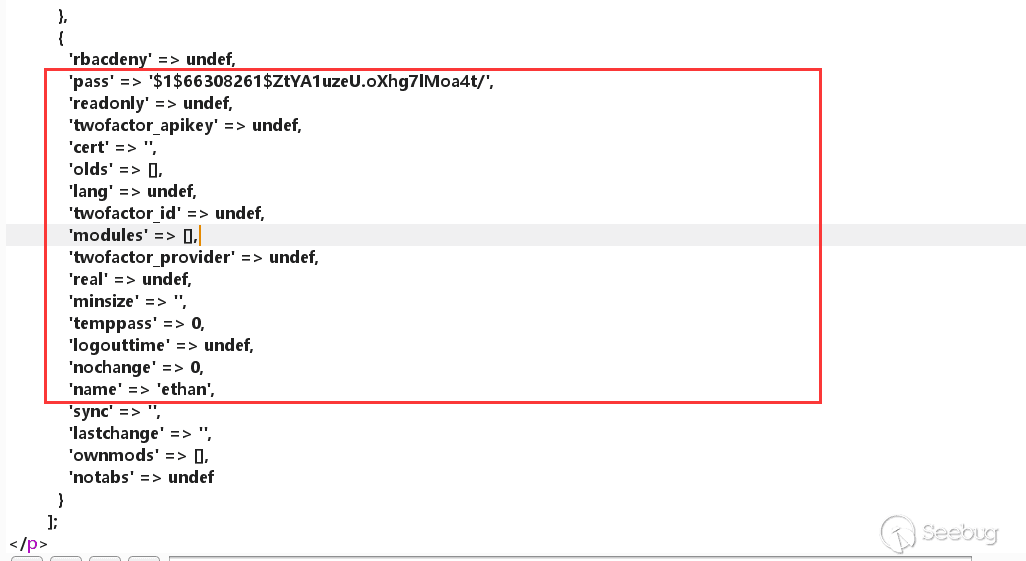 Let's print the value of $wuser.

Print out the value of $wuser in the if conditional statement to confirm the idea.

In perl language, undef is the default value when the variable is not initialized. In general we see it as empty or 0. It is probably for the distinction between the modification of the system user password and other users.

From our analysis above, the value of $wuser is undef when the user is root.

I think qx/..../ is quite strange, because the official patch deletes it directly:

It feels like that this vulnerability is added to it. The version 1.920 downloaded on Github does not have qx/..../. No records related to qx/../ were found with the git log -p command. The source code and installation package downloaded on sourceforge have vulnerability code. Is this a back door?

In 2012, the CDN node of SourceForge Korea was suspected to be invaded, and a backdoor was implanted in the popular download resource phpMyadmin. To know more about this: https://www.seebug.org/vuldb/ssvid-60402

I have also found out some news on Github, https://github.com/webmin/webmin/issues/947

I downloaded the 1.890 version from sourceforge. The vulnerabilities are as follows:

We can know that the trigger of this vulnerability only needs an 'expiredparameter, and the previouspasswd_mode=2` is not necessary.

In other words, the triggering of the vulnerability in the 1.890 version does not require any dependencies. Is this a mistake or a malicious back door?

Here we will verify it in a more intuitive way. Download the source code from Github and sourceforge.

password_change.cgi file of version 1.920 is as below:

Webmin 1.890 version of the password_change.cgi file

Compare these two files, we will find there is something wrong about the sourceforge code, and it is very likely that a back door is implanted in it.

After verification, only the sourceforge code and the installation package have a backdoor vulnerability.

Among them, the dependency of the 1.890 version backdoor vulnerability is the least, and the most harmful! Guess this should be the initial backdoor, and later the backdoor was implanted without considering the logic of the code. This is why the vulnerability trigger is limited!

The picture below shows the 1.890 version:

Replace the indicated label with $miniserv{'passwd_mode'} == 2 || die "Password changing is not enabled!";, the replacement code does not have any backdoor.

I did not expect an emergency to develop into a study of backdoor documents. Thanks to @Longofo for helping me to test a lot of files and code. Heige also published The stories behind Webmin CVE-2019–15107 on the medium describing the process of finding this backdoor discovery:https://medium.com/@80vul/the-stories-behind-cve-2012-5159-198eaad2449d