Shenzhen NEO Coolcam electronics co. LTD is a new high-tech company that integrates the R&D, production, and marketing of network digital products. It's the pioneer in the field of Webcam in China. The company set up a domestic Camera R&D Center in 2004 and obtained many national patents. The products were authorized via the national quality supervision department and the international standard certification like CE and FCC.

As early as August 02, 2017, the security researcher of Bitdefender companies had pointed out that there are multiple buffer overflow vulnerabilities in devices such as NIP-22 and Wi-Fi iDoorbell. Thousands of related devices that leaked on the public network are threatened with potential security threats. The researchers also provided relevant reports. Around September 2017, we noticed the latest firmware released on the NEO Coolcam’s official English website, which fixed the overflow vulnerabilities.

On July 10, 2018, we used ZoomEye Cyberspace Search Engine to locate related devices and found 650,000 IP history records in the later risk assessment of IOT devices which are susceptible to this vulnerability. China has the largest number of devices with the vulnerability, about 167,000. In addition, we have the following findings:

This means that a large number of target devices are at risk. The 404 Security Team has made an in-depth study of a series of buffer overflow vulnerabilities in NEO Coolcam's NIP-22FX cameras and executed remote code successfully from the buffer overflow, which confirmed that the vulnerability has the potential risk of being exploited by black products. Bypass login vulnerability has been found in the process of an audit at the same time, which is also a serious threat to user privacy.

The main program for web service and RTSP service is the ipc_server file, and the target system is an ARM, 32-bit small end architecture.

The mitigation measure of buffer overflow is all closed.

It is worth mentioning that the user and guest accounts can also view video streams and most users will not change the default password of these accounts, which lead to privacy leaks.

The overflow point is located near the address 0x0007DE80. The processing logic of this function is to call the libs_parsedata function to parse the usr and pwd in the URL, and then store them in two buffers of this function stack frame.

It takes 6 parameters from left to right. The order is:

The processing logic of this function is to use the string needle and delimiter a4 to intercept the original string a1. After intercepting, it writes the intercepted string into the buffer which referred as a6 by the strncpy() function. The writing’s length is similar to the intercepted string. Finally, it writes a byte of '\x00'. Because the length of the parameter GET is controllable, a buffer overflow will occur when an attacker inputs usr or pwd which oversteps the buffer length.

The following code is located at the 0x0004E4D8 address in ipc_server:

The attackers only need to let the return address point to the address 0x0004E4D8 with the command to be executed, which can lead to remote code execution from the buffer overflow. The libs_parsedata function will write a \x00 at the end of the string, so we can exploit two overflow vulnerabilities to write the return address and the instruction to be executed at the same time.

The target system doesn’t contain commands such as curl, nc, wget and so on. So we can redirect the command execution results to the Web directory and then access the HTTP interface to get the execution result. If the attacker and the camera are in the same network environment, the attacker also can open the telnetd service of the targeted system to achieve complete control of the vulnerable device. Because the file system of the target device is mounted in the manner of read-write, it has the risk of malicious tampering by an attacker.

The results on NIP-22FX are as followed: 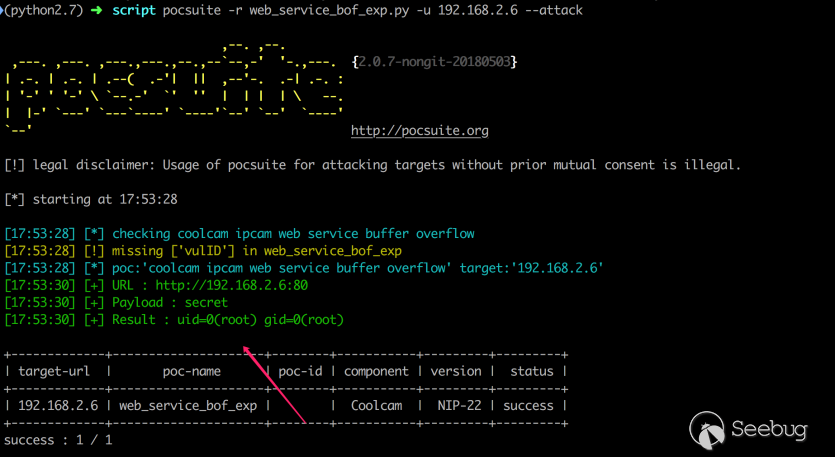 In the latest version of firmware (V7.7.4.1.1-20170828), a seventh parameter is added to the libs_parsedata function to control the target buffer writable length. 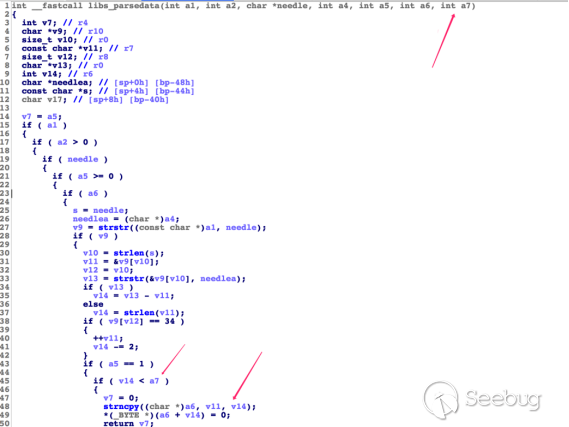 The overflow point is located at address 0x006C6D4, using the sscanf function to match key and value in the Authorization: Digest key=”value” in RTSP Header and saving them on the stack of this function. The stack is overflowed because both of the lengths cannot be checked.

The way to exploit this vulnerability is the same as the method in Section 2.3.2. The attacker can use two overflow vulnerabilities to write the instruction to be executed and the return address which can easily lead to remote code execute from buffer overflow. The results in NIP-22FX are as follows: The telnetd service of the target system is successfully opened by using the buffer overflow of the RTSP service.

In the latest version of firmware (V7.7.4.1.1-20170828), the length constraint is added to the regular matching expression of sscanf, and the maximum of it is 255 bytes. The return address cannot be overwritten since there are 296 bytes left between buffer and stack bottom.

3. The scope within vulnerability impact 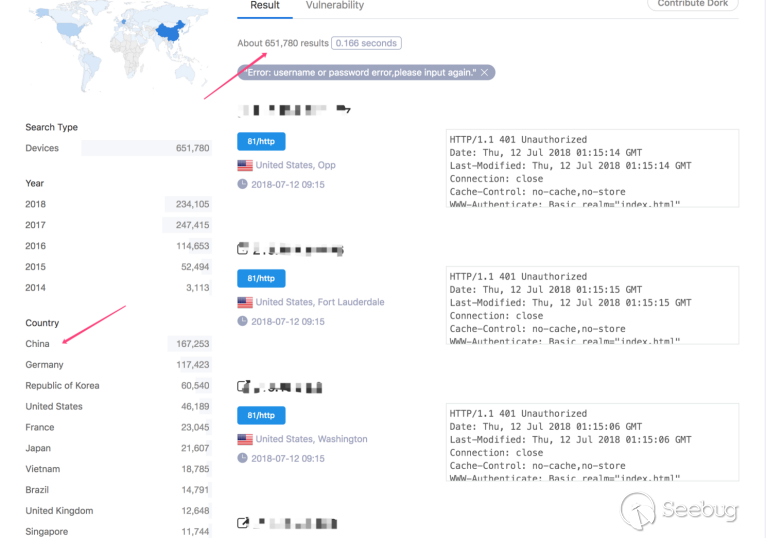 We use the keyword, “Error: username or password error, please input again.”, to search on the ZoomEye's Cyberspace Search Engine, and get 651780 IP history record. After verification, there are 58,413 devices still alive.

The distribution of survival equipment countries is as follows. It can be observed that these vulnerabilities are mainly distributed in Korea, the United States, China and other countries. Because China's network IP changes rapidly, the number of relevant surviving devices is more than 5878 in China.

In the process of data analysis for devices that can be affected by the vulnerabilities, we found that a large number of devices were sold by OEM. Device firmware has great homology, and some devices between two different vendors are just simply changing LOGO.

Using the md5 value of the device page 'web/mainpage.HTML' to distinguish different OEM, statistical results are as follows: 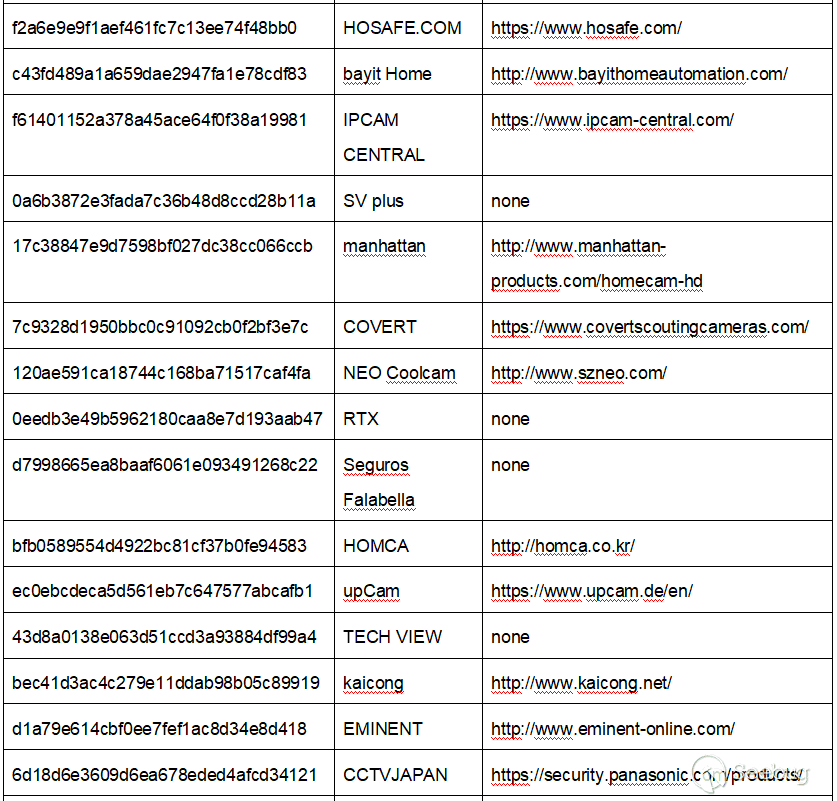 In addition to the default credential problem, NEO Coolcam's HD camera NIP-22 also has a buffer overflow vulnerability that doesn't require authentication for Web services and RTSP services. This overflow vulnerability is not difficult to exploit and the attacker can execute arbitrary commands remotely based on it. The watchdog process will restart the entire system after an overflow problem occurs which can also be used by an attacker to cause the deny of service. Due to the homology of firmware. These two overflow vulnerabilities are also likely to exist in devices which produced by other OEM manufacturers.

To avoid privacy leaks, it is recommended that users repair the series of vulnerabilities as soon as possible.

First of all, users can connect to the webcam Web management system and modify the username and password of three sets of default credentials on the following page.

What's more, if the device is NEO Coolcam's, it is recommended to download the latest version of the firmware from the NEO Coolcam's official website and manually update to repair the two overflow vulnerabilities. If the device is produced by other OEM vendor, you can try to contact the vendor to update firmware and isolate the device from the public network.

Because this series of vulnerability can affect dozens of OEM vendors at home and abroad, the vendors in the above list should check again to avoid the possible vulnerabilities, release patch firmware in time and notify their users to update the firmware.