We also found a supplementary to these attacks in further research: Scavenging Attacks. The attackers resort to the miner or have the computing power to get the right to package the transaction into the block. They construct a transaction with a gasPrice of 0 on an attacked node in the "Smuggling Vulnerability", waiting for the users to unlock the signature account broadcast. The attackers also set a malicious node to receive the transaction and pack the qualified transactions to implement 0 gas transfer. Through this kind of attack, they can obtain all the ether which are not enough or barely enough to pay the fee on the node. And to a certain extent, it can prevent the race of other attackers. It’s a paragon like "gathering wool".

In addition, after gathering enough residues of ether, the attackers stared at the tokens in the accounts which had been stolen. Until now, some tokens in the stolen accounts are still being attacked by "Scavenging Attacks" for gathering small amount tokens.

This article will start with a 0 gas transaction, simulate and recurrent the actual process of stolen currency and analyze the key points of the success of scavenging attack.

0x01 Starting with a 0 gas Transaction

In the blockchain system, each transaction should come with a portion of gas and the corresponding gasPrice as a fee. This fee will be rewarded to the miners who completed the package when the transaction is packaged into the block.

In the "Exhilarating Coin, Maverick Thief - Various Coin Stolen Tricks of Ethereum JSON-RPC Interface" we have mentioned an attacker account that uses the Ethereum JSON-RPC interface 0x957cD4Ff9b3894FC78b5134A8DC72b032fFbC464.(https://etherscan.io/address/0x957cD4Ff9b3894FC78b5134A8DC72b032fFbC464) The attackers scan the open RPC port on the public network and construct a high-fee transaction request. Once the user unlocks his account, the balance is transferred to the attackers’ account or the contract account created by the attackers.

When analyzing the transaction information of the account, we found a transaction that wasn’t in common sense. We can start with it.

As mentioned above, the attackers will use a higher fee to ensure the success of their transaction. The miners will sort the gasPrices of each transaction in the txpool of this node in reverse order, and preferentially package the high gasPrice transaction into the subsequent blocks. There are countless transactions happening all the time in this world. The lowest gasPrice for a transaction was 3Gwei on the last 7 days. How did this 0 gas transaction happen and how it was packaged into the block?

In the blockchain system, anyone can join the blockchain network and become one of the nodes, participating in keeping accounts, mining and other operations. The core of the credibility and decentralization of the blockchain is the consensus mechanism.

In Ethereum, the miner packs the hash value of the previous block, the transaction with a high cost in txpool, the timestamp, etc., and continuously calculates the nonce to mine. The miner who first obtains the qualified nonce value will have the right to book, gets the fee and mining reward. The miner will broadcast the obtained block and it will be verified by the other nodes. If there is no error, the new block is considered to be generated and the blockchain height is increased. This is the process of each node generates a new block to maintain consensus.

There are two issues need to be confirmed to complete 0 gasPrice transactions.

Next, we will test the operations related to the 0 gasPrice transactions. Finding out how 0 gas transactions are generated, how they accepted by txpool, whether the block that was packaged with the 0 gas transaction could be recognized, and answer to the above question was confirmed.

First, let's confirm whether the transaction can enter the node's txpool and enable a test chain. Its default RPC port is 8545 and uses a python web3 package to initiate a 0 gasPrice transfer.

The first node initiates the transfer script and unlocks the accounts before transferring the account.

The first node still uses the script to initiate a 0 gas transaction, and its txpool was successfully appended. But the second node illegally rejected the transaction because of gasPrice.

We found the parameters related to this in the configuration of the geth.

Change it to 0 when it starts, but the transaction still does not appear in the txpool of the second node. 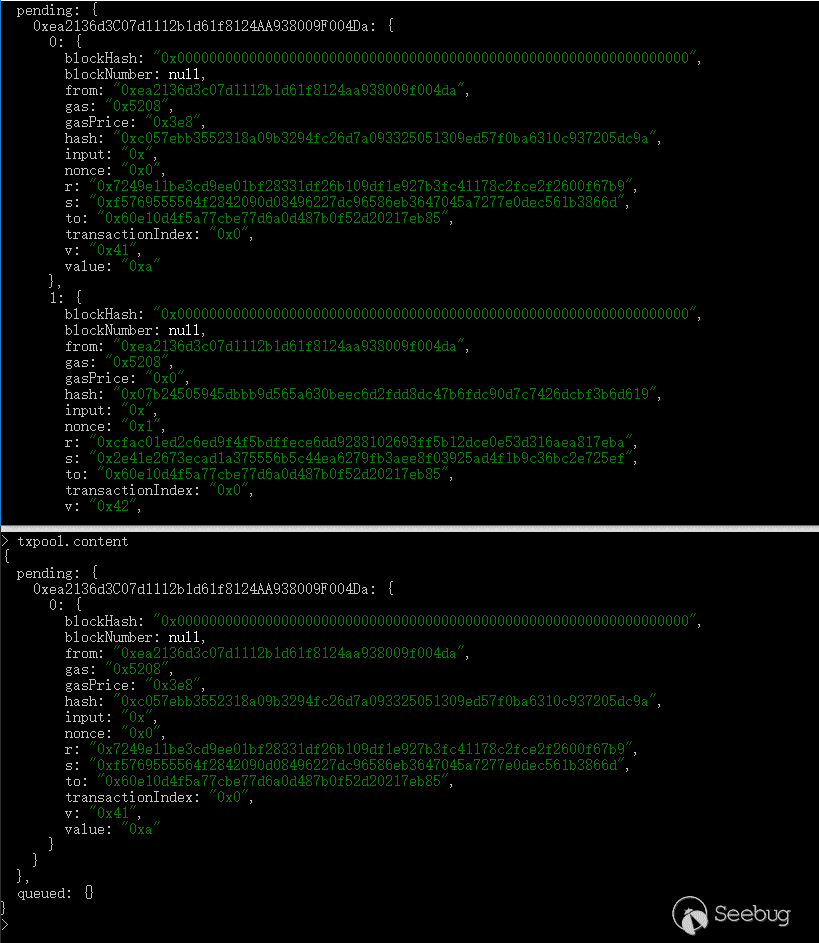 We can know from the source code, this parameter is the lowest gasPrice of the transaction to control the increasing txpool, but cannot be less than 1.

The first node began mining. After the transaction was packaged into the block, it was found that the second node recognized the block and reached a consensus. Both of the nodes increased in height.

We will conduct a brief source code analysis to support our conclusions.

(The following code analysis is based on the current latest submission at https://github.com/ethereum/go-ethereum : commit 6d1e292eefa70b5cb76cd03ff61fc6c4550d7c36）

At present, the most popular node(Geth / Prity) program in Etherenum provides RPC API for docking pools, wallets, and other third-party programs. First, confirm the implementation of the code when the node is packing txs.

It has found that there is a minimum requirement for gasPrice When generating a txt instance. Specifically in this function will refuse to receive this transaction.

ii.Removing Transactions Below the Threshold

Code path: ./go-ethereum/core/tx_list.go And it will delete the transaction below the threshold in the processing txs, but the local transaction will not be deleted.

The above section is a node within the blockchain network and there are partial filtering or rule restrictions when attempting to receive or join a transaction with 0 gasPrice. But we can still legally add the 0 gasPrice transactions to the block by modifying the source code, and perform the nonce subsequent calculation. Next, we continue to analyze the source code to investigate whether the block obtained by this method can be accepted by other nodes and reach a consensus.

Code path: ./go-ethereum/consensus/consensus.go This is the consensus algorithm engine interface provided in the geth.

By looking at VerifySeal() we found that the following was verified:

First, the attackers construct 0 gas and a normal transfer transaction with the way that exploited by smuggling vulnerability. After users unlock the account, broadcast the transactions. The specific process is as follows:

From a special transaction like h0 gasPrice we can draw the following conclusions:

By collecting such 0 gasPrice transactions and adding them to partial miners' txpools, such transactions will also be packaged when the miner digs up a new block. The attacker may cooperate with some miners or have a certain computing power so that the miners no longer follow the principle of honest mining and maintenance blockchain system.

The emergence of 0 gas transactions brings significance to many low-yield attacks.

In this way, the attacker can transfer all the balances in the attacked account in combination with other attack methods to maximize the revenue.

According to the attack method in "Exhilarating Coin, Maverick Thief - Various Coin Stolen Tricks of Ethereum JSON-RPC Interface", in the case of the less account balance or insufficient to pay the transfer fee, the residues in the account can be transferred to the wallet through the above-mentioned attack scheme for "gathering wool". Because the gasPrice of this transaction is 0, multiple transactions of this type can be packaged in one block at the same time, such as multiple sets of transactions under this contract: 0x1a95b271b0535d15fa49932daba31ba612b52946. Several transactions in this block: 4788940 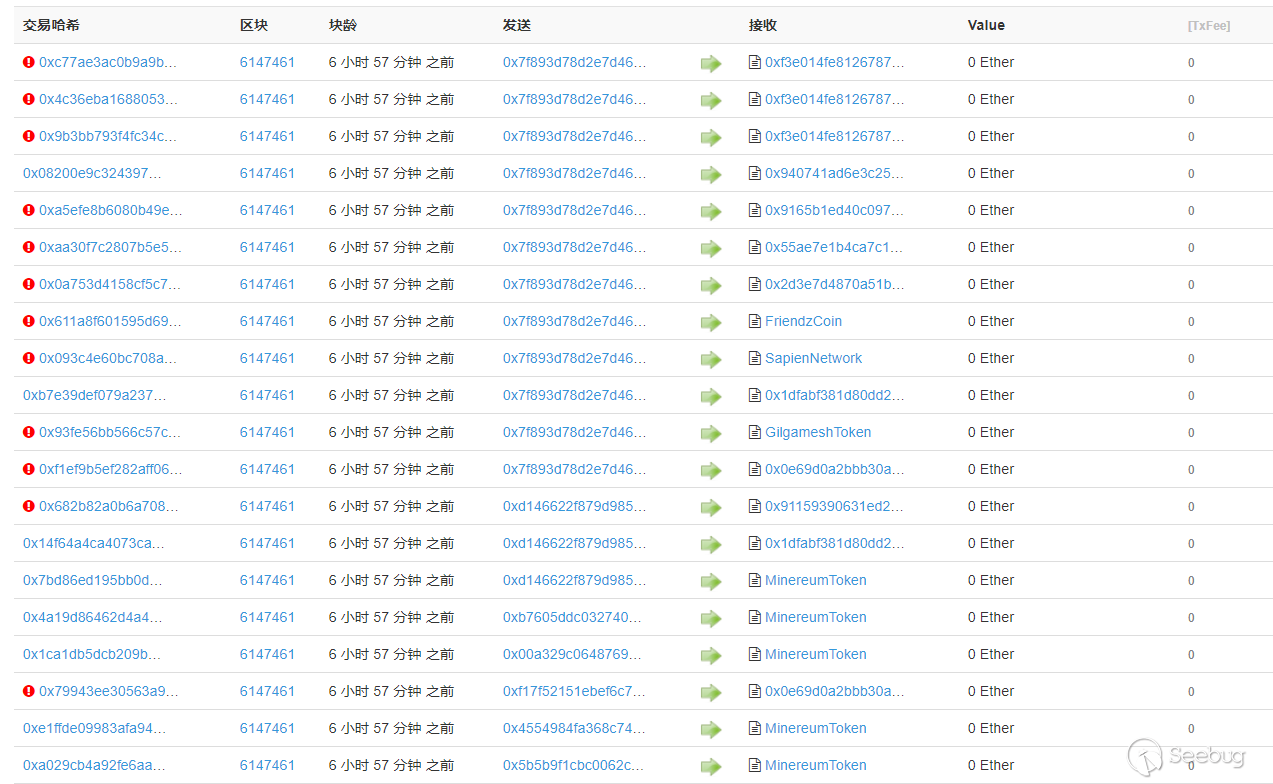 The attacker found that some of the smart contract tokens still existed in these accounts in the absence of ether currency in the stolen accounts. Without Ethereum, you can't pay gas for transfer. And 0 gas transactions can solve this problem perfectly. Until now, many attacked accounts without ether currency are transferred tokens in this way.

Because the 0 gasPrice transactions are only used to extend other attack schemes, the defense should also be utilized on the previous json-rpc interface.

We noticed that only had a small number of early 0 gasPrice transactions carrying little ether, which is in line with our expectations for the characteristics of the gathering wool. According to statistics, there have been 748 accounts since June 2017, and a total of 24.2eth was transferred by 0 gas. Most of these 0 gasPrices are transfer requests for the TOKEN issued by the contract, transferring the tokens in the user's account to the contract owner's account, for example:

The attackers have the computing power of multiple mining pools and transfer a variety of tokens owned by many attacked accounts to the corresponding accounts. Although the amount of a single transaction is small, there are more accounts and contracts that can be used for such attacks and no fee is required. Many a little make a mickle. The attackers are still carrying out scavenging attacks on these tokens.

The premise of the blockchain system based on decentralization to reach a consensus on the transaction is that the vast majority of miners will maintain the entire bitcoin system through honest mining. When the miners are no longer honest, the credibility and decentralization of the blockchain will be greatly reduced. When a hacker cooperates with a miner or has the computing power to become a miner, it will provide more extended attack schemes based on existing attack techniques. The emergence of the 0 gasPrice transactions violates the original intention of the blockchain design, that is, the miners should pay the fee as an incentive.

The popularity of blockchain technology and the virtual currency have given the currency a huge economic value and everyone wants to get a little benefit in the blockchain wave. Especially hackers. As a currency thief, they racked their brains to attack blockchains and contracts from all angles. When hackers live in miners, they cannot only dig out blocks but also dig out vulnerabilities.