0x01 The beginning of front-end defense

The reason for a basic XSS vulnerability page is that the user data is not effectively filtered from input to output, as shown in the sample code below.

For such an unfiltered pages, we can construct an XSS vulnerability exploit in a variety of ways.

For such vulnerability points, we usually use the htmlspecialchars function to filter the input, which can deal with 5 symbols.

In a general, such filtering may be sufficient for the above pages, but actually there will be more occasions than you expect.

For such case, the above filtering does not make any sense, especially when the input point is in a script tag.

Generally speaking, to be able to deal with such XSS points, more filtering methods will be used.

Firstly, we may need to filter so many symbols as follows:

However, excessive filtering of symbols seriously affects the user's normal input, which is why this kind of filtering is rarely used.

Most people will choose to combine htmlspecialchars function with blacklist.

It seems no problem if this filtering method is good enough, but recalling many XSS vulnerabilities, it’s found out that most of them are created from where the filter function ignores.

So, is there a lower-level defense that can defend against vulnerabilities from the browser level?

In such case, CSP is created.

The characteristic of CSP is that it defenses at the browser level, the same level as the same-origin policy. Unless there is a vulnerability in the browser itself, it is impossible to bypass the mechanism.

CSP only allows the parsing of approved JS blocks, JS files, CSS, etc., and only allows requests to be made to the specified domain.

There are many types of instructions, each of which is in charge of part of the request in the browser. 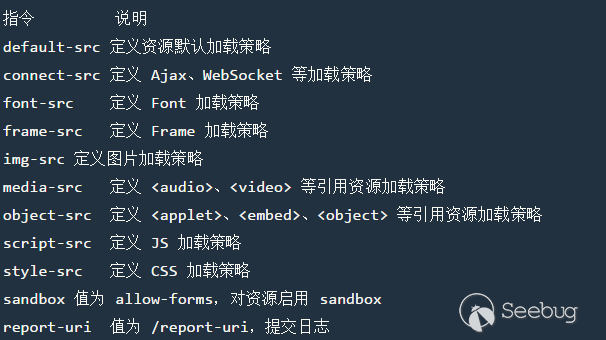 Each instruction has a different configuration. 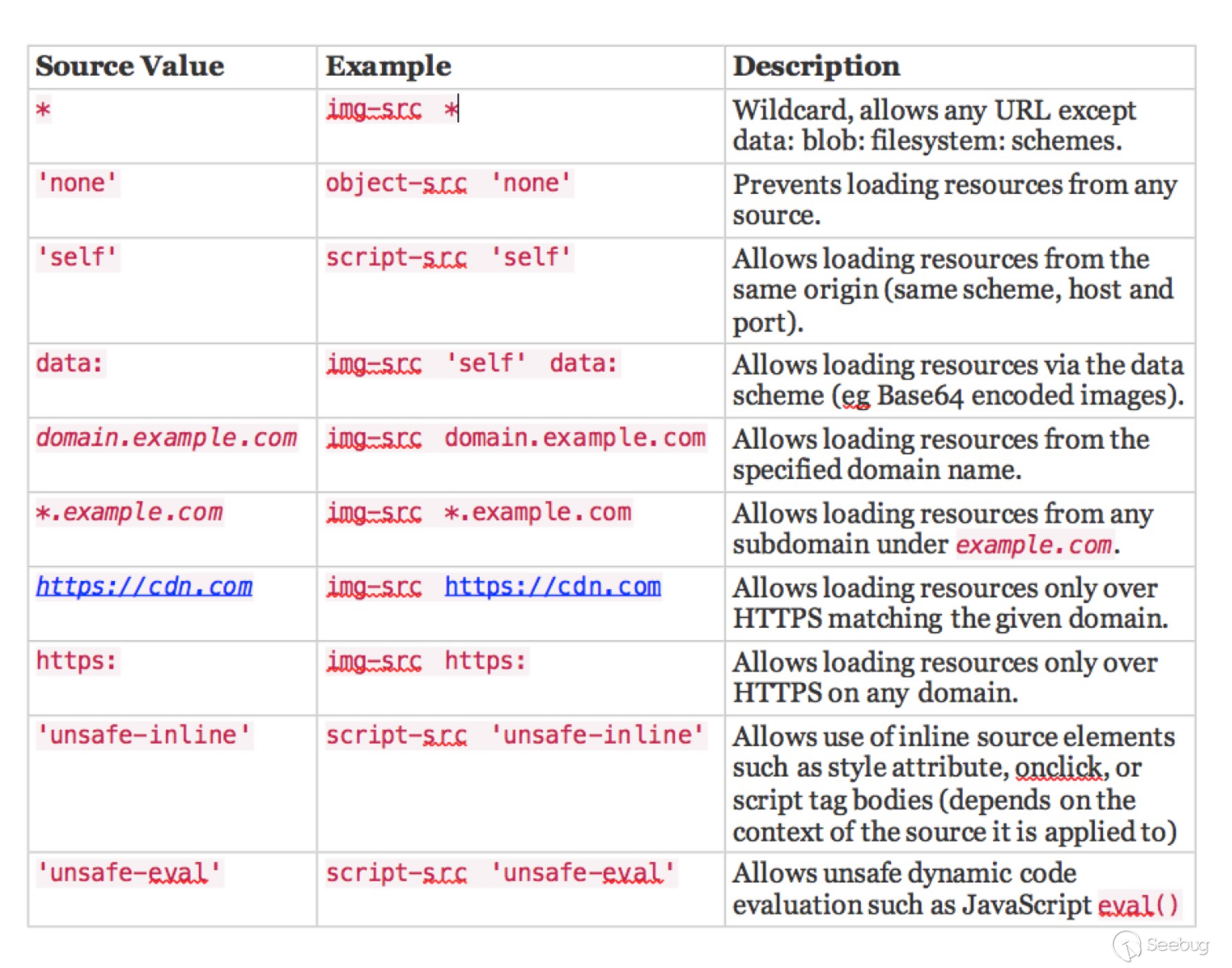 To put it simply, there are corresponding loading strategies for different sources and different ways of loading resources.

We can say that if there is a strict enough CSP rules, then XSS or CSRF can be prevented from its source, but is it the real case?

CSP can be so strict that it conflicts with many websites themselves. In order to be compatible with various situations, CSP has many loose modes to adapt to.

There are two kinds of defenses against front-end attacks in CSP:

The following “Bypass” methods are also related to these two points.

It is such a brilliant CSP that it can load JS of any domains.

If CSP is invalid, you can use any attack method.

When you find it unsecure to set self, you may choose to limit the trusted domain of the static file to the directory. But if there is a controllable redirect file in the trusted domain, the CSP's directory restrictions can be bypassed.

Suppose there is a 302 file in the static directory.

Upload a test.jpg like before, then jump to the upload directory to load JS, and you can execute successfully.

Apart from preventing parsing of untrusted JS, another function of CSP is to block requests to untrusted domains.

Under the above CSP rules, if we try to load the image from the external domain, it will be blocked.

In the evolution of CSP, there will inevitably be some omissions.

In CSP 1.0, the restrictions on link are not complete. Support of different browsers for CSP is incomplete, including Chrome and Firefox. Each browser maintains a CSP rule that includes CSP 1.0, partial CSP 2.0, and a small percentage of CSP 3.0.

No matter how strict the CSP is, you never know what kind of code will be written.

The following is a sample code from Google team’s report on CSP last year.

By chance, you write a JS that executes an input string.

In fact, many modern frameworks have code that parses strings from a given tag as JS to execute.

“Angular Js” even has “ng-csp” tag to be fully compatible with CSP, and can be executed smoothly in the presence of CSP.

In this case, CSP is meaningless.

Maybe there is no such problem in your site and you may use JSONP to get data across domains, but JSONP itself is the nemesis of CSP and it deals with cross-domain problems, so it must be in the trusted domain.

So you can construct arbitrary JS, even if you limit callback and get the data of \w+ only, some JS can still be executed, and combine with some special attack methods and situations, there is still a hazard.

The only way is to set the return type as JSON format.

This is the most common CSP rule compared to the previous CSP rules.

Since we can execute arbitrary JS code, the remaining question is how to bypass the restrictions on trusted domains.

This method can only be used in Chrome, but it works surprisingly well.

In the mechanism of browsers, jump is cross-domain behavior.

Through cross-domain requests, we can send all kinds of information we want.

0x04 The dilemma and upgrade of CSP

After CSP was officially proposed as a means of mitigating XSS attacks, various problems continually broke out within a few years.

Using their powerful search engine library, the Google team analyzed CSP deployment patterns for more than 160 million hosts. The results are as follows:

The load script is most commonly whitelisted with 15 domains, 14 of which are unsecure, so 75.81% of the policies allow the attacker to bypass the CSP because of the script whitelist. In summary, we found that 94.68% of the policies that attempted to limit script execution were invalid, and 99.34% of CSP policies developed by hosts with CSP did not help to defense XSS.

In the paper, the Google team officially proposed two types of CSP that were previously proposed.

Generate the nonce string dynamically, and only script blocks containing nonce fields and strings of equal value can be executed.

This string can be implemented on the backend and regenerated every time the request is made, so that you can ignore which domain is trusted, as long as the arbitrary resources loaded are trusted.

strict-dynamic means that the JS code generated by trusted JS is trusted.

This CSP rule is mainly used to adapt to a variety of modern front-end frameworks, through which it is possible to substantially avoid loose CSP rules.

The Google team hopes to address various CSP issues arising from the development of the frontend by means of these two methods, but it's far from a one-shot deal.

The advent of the Web 2.0 era has made the frontground and background interact more and more. In order to cope with this, modern browsers have a caching mechanism, but when there is no modification in the page or don’t need to request the background, the browser will read the content of the page from the cache.

location.hash is a typical example.

If there is XSS in the JS as a result of performing “location.hash”, then such an attack request will not go through the background, so the random value behind the nonce will not be refreshed.

I have come up with CTF questions about this CSP Bypass method.

Apart from the common “location.hash”, a new attack method is proposed--read page content through the CSS selector.

Script Gadgets are similar to short tags and can be seen everywhere in modern JS frameworks.

Script Gadgets itself is dynamically-generated JS, so it is almost a destructive “Bypass” to the new CSP. 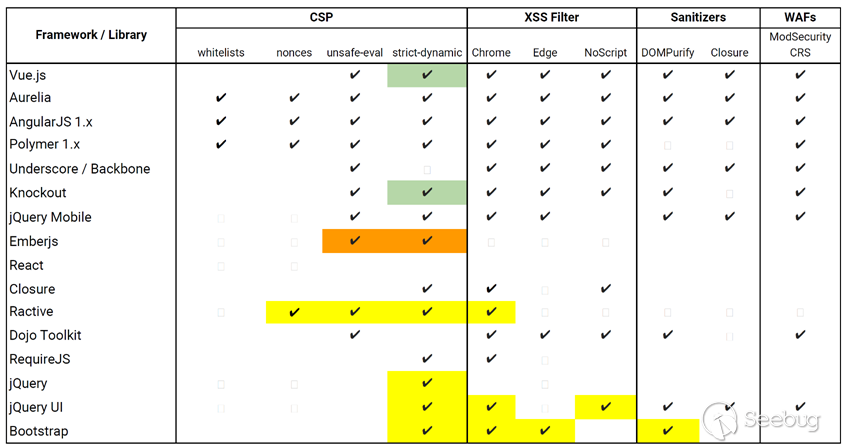 Combining blacklist with CSP is still the most reliable defense, but there is no end to defense.