Vim is a terminal text editor, an extended version of vi with additional features, including syntax highlighting, a comprehensive help system, native scripting (vimscript), a visual mode for text selection, comparison of files and so on. Vim and Emacs are the dominant text editors on Unix-like operating systems, and have inspired the editor wars. Neovim is a reconstruction project of Vim aiming to improve the user experience.

On June 4, 2019, an arbitrary code execution vulnerability has been discoverd in Vim/neovim. The attacker can execute arbitrary commands on the target machine by cheating the victim to open a specially crafted text file via vim or neovim.

The vulnerability was caused by the implementation of the modeline. There have been several other modeline-related vulnerabilities patched, such as CVE-2002-1377, CVE-2016-1248.

Arminius has analyzed the CVE-2019-12735 very clearly. This article is a summaryand a complete analysis of the multiple vulnerabilities discoverd in the past(neovim is similar to the vim environment).

Since all vulnerabilities are related to modeline, it is necessary to know what modeline is.

In normal mode, press the : to enter command mode. In command mode you can execute some commands provided by vim or plugin, just like in a shell. These commands include setting the environment, operating files, calling a function, executing a shell command, and so on. For example, we set it not display the line number:

If you have a lot of preferences, it will be extremely time-consuming to manually set the environment each time. At this time, .vimrc comes in handy. When vim is started, the .vimrc file in the current user root directory will be loaded automatically.

The settings in .vimrc take effect for all files that you open, making it difficult to personalize individual files, which is why the modeline comes into being.

Vim's modeline makes it possible for you to perform file-level settings for each file, which overrides the settings of the current users .vimrc. Vim turns off modeline by default, and appending set modeline to the end of .vimrc can open it.

If modeline is turned on, vim will parse the setting lines that matches the format at the beginning and end of the file when opening it.

There are two forms of modelines. The first form:

For security reasons, no other commands than "set" are supported(somebody might create a Trojan text file with modelines).

In particular, the values of options such as 'foldexpr', 'formatexpr', 'includeexpr', 'indentexpr', 'statusline', 'foldtext' can be an expression. If the option is set in modeline, the expression can be executed in the sanbox. The sanbox is essentially a limitation on what the expression can do, for example, you cannot execute shell commands, read and write files, or modify the buffer in the sanbox:

The implementaion of the sanbox in vim is also very simple.

Sanbox checks at the beginning of dangerous commands such as libcall, luaevel, etc.. If calling is found in the sanbox, the funcion will return diretly.

Among the several RCE vulnerabilities discoverd in the past, CVE-2002-1377 and CVE-2019-12735 are due to the fact that some commands do not check the sandbox, resulting in abuse in the modeline mode for arbitrary command execution.

The arbitrary code execution vulnerability discoverd in 2002 affects vim versions 6.0 and 6.1. It has been such a long time that the enviroment is difficult to reproduce.

Sanbox check has been added, and libcall cannot be called under modeline.

Vim before patch 8.0.0056 does not properly validate values for the 'filetype', 'syntax' and 'keymap' options, which may result in the execution of arbitrary code if a file with a specially crafted modeline is opened.

Clone the vim repository from github. Switch to the v8.0.055 branch, and then compile and install. The content of .vimrc is as follows:

Generally debugging with Verbose. set verbose to 20, it gives you output that everything vim is doing. Look at the call chain： 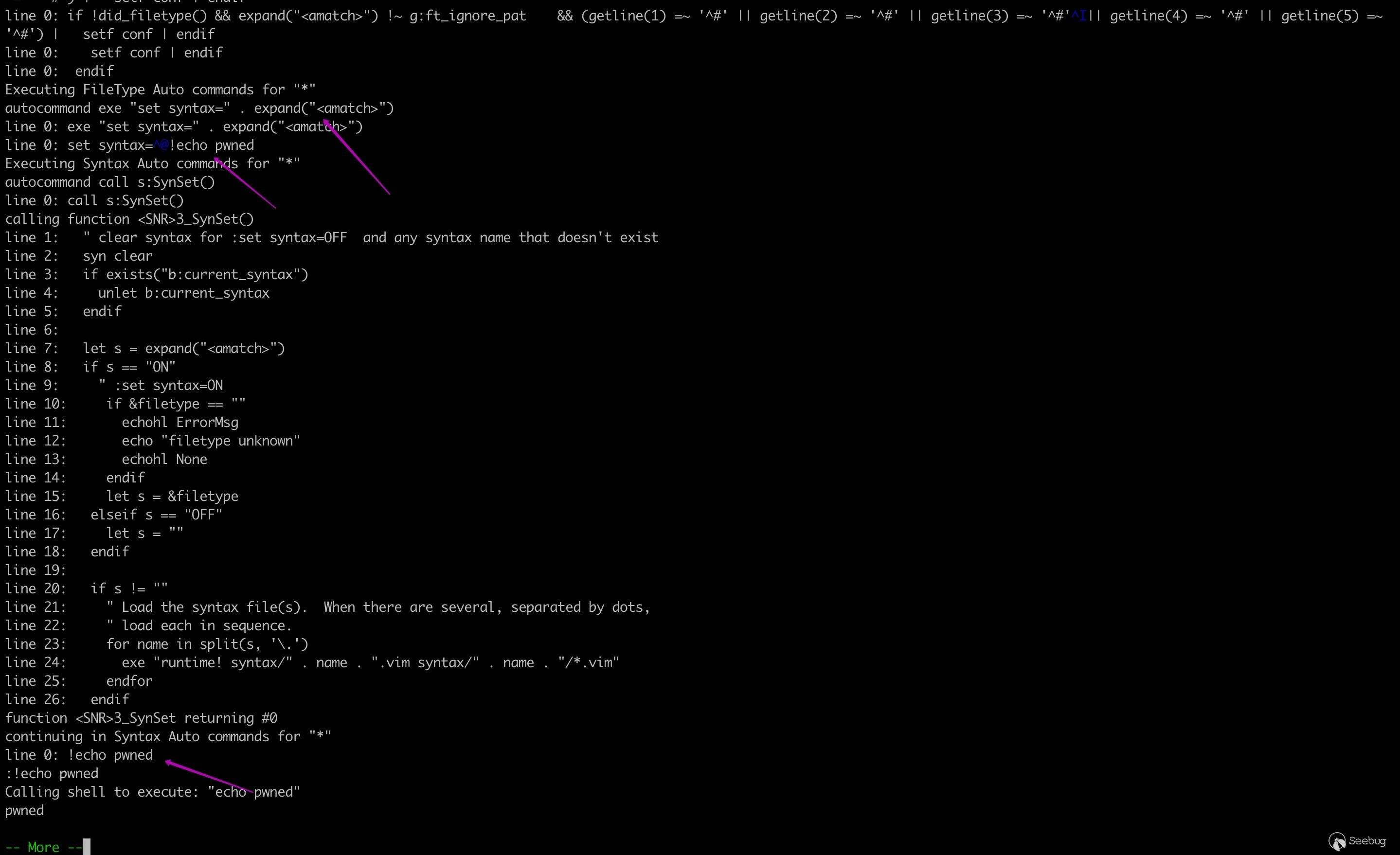 Autocommand is a way to tell Vim to run certain commands when certain events happen. Let's dive right into an example.

If we type :set syntax=python in the command mode, vim will look for vmscript related to python syntax in the corresponding directory and load it.

If we set filetype or syntax in modeline, au! FileType * exe "set syntax=" . expand("<amatch>") will be triggered to complete the above process. Remove all autocommands associated with FileType firstly and then call exe (ie execute) to execute set syntax=filetype. "exe" command is used to execute an expression string, resulting in command injection because the filetype has not been validated and sanitized.

Related code is in /usr/local/share/vim/vim80/syntax/syntax.vim.

:so! filepath can read vim commands from filepath。

Construct the PoC: put the command to be executed in the text section, and use so! % to load the current file.

A arbitrary code execution zero-day vulnerability was found in notepad some days ago. It seems vim doesn't like falling behind either.

Vulnerabilities are everywhere, and be cautious to open any unknown files.