Inspired by the CVE-2018-8495 vulnerability, this paper analyzes and studies the security issues of url scheme in PC for the purpose of learning.

In the process of using a computer, you will often find that clicking on a certain link will try to launch a local application, for example, clicking on mailto://test@test.com will launch the Mail client; clicking on thunder://xxxxx will launch the Thunder client. This is just the application of the url scheme. In addition, we can also find that there are some different prefixes in the address of the browsers, such as http://, https://, ftp:// and file://, which is also the application scenario of url scheme.

In order to improve the user experience and enrich the functionality of the browsers, major operating systems and browser developers allow developers to associate URLs with local applications so that when a user uses a browser, they can launch an application by clicking on a link; this function is simply referred to as a url scheme. For example, using IE8 under Windows 7 to launch the default mail client outlook:

Due to the excellent function design of url scheme, various major operating system developers have supported it. No matter it is Windows, MAC, Linux for PC, or iOS, Android for phones, they all have good supports to url shceme. This article analyzes the security issues of url scheme under PC. There are similar problems under the mobile, but the exploits are different, and no more details here.

The workflow of url scheme

So how is the url scheme registered in the operating system? Different operating systems have different ways of implementation, here illustrates by taking Windows 7 for example.

In Windows 7, the url scheme is recorded under the HKEY_CLASSES_ROOT registry, such as the related fields of mailto:

If you want to create a new url scheme, simply add it to HKEY_CLASSES_ROOT and fill in the corresponding values in the corresponding fields. The created subitem name is just the name of url scheme function, and under that subitem are also two items: DefaultIcon and shell. DefaultIcon contains the default icon path used by this feature. Continue to create subkeys under the shell item, for example: open, and then create a command subkey under the open item to describe the path and parameters of the application.

PS: In fact, there are two ways to add url scheme in Windows. The above is the way to add the registry directly (Pluggable Protocol), and the other is the Asynchronous Pluggable Protocol. The registered protocol will be recorded under HKEY_CLASSES_ROOT\PROTOCOLS\. For more details, you can refer to: https://docs.microsoft.com/en-us/previous-versions/windows/internet-explorer/ie-developer/platform-apis/aa767916(v%3dvs.85).

For the url scheme function, simply speaking, it's that you can start a local application through url, which undoubtedly greatly improves the user experience, but at the same time brings some security risks, such as the user can start a malicious program through the browser, or the application launched by the user has special features and can be called (e.g. delete files, start network connection).

In addition, for related applications that contain urls, the client is often a user, a reader, not an editor; that is to say, urls can be maliciously constructed by attackers to achieve the effect of launching local applications remotely. 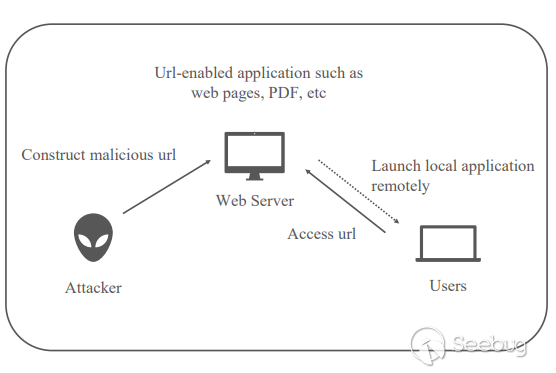 So in the operating system, what url scheme can be called? Here are three scripts for exporting the url scheme under the three major PC systems:

When you run scripts, you can see that there are many url schemes that can be called under the system, including those supported by the operating system by default, such as HTTP, FTP and mailto, as well as third-party applications, such as QQ and Thunder. If there are security issues with these applications, such as support for deleting files, launching another programs, and other sensitive operations, the security issues will be triggered remotely with the help of the url scheme.

This paper analyzes the possible security issues mentioned above and gives examples.

In 2007, Heise Security exposed a remote command execution vulnerability caused by url scheme, which appeared in Windows XP that has installed IE7, and affected all applications that supported the url scheme.

The constructed PoC is as follows:

The running results in Windows XP is as follows:

The cause for the vulnerability is that Microsoft changed the operating system's handling of url by installing IE7 for Windows XP, and the application directly passes the path to the operating system for startup, eventually resulting in a special link containing % to start arbitrary program.

After the vulnerability was disclosed, Microsoft did not release a fix and thought it was not the cause of Windows XP. Later, major application developers fixed the vulnerability. Of course, the upper application can check the input parameters, but it can also be considered that it is the operating system that resulted in the url scheme remote command execution.

In 2018, among the security issues of url scheme, there are two problems caused by the IE and Edge parameters injection under Windows. One is Electron Custom Protocol Command Injection (CVE-2018-1000006) and the other is Edge Remote Code Execution (CVE-2018-8495).

Under Windows, IE and Edge handle url scheme differently. After the browser receives a url scheme, it accesses the registry to query the corresponding application path, and then decodes the url, and then calls the ShellExecute function cluster to launch the application. It is because of the url decoding that causes the double quotes to close, thus causing the parameter injection. 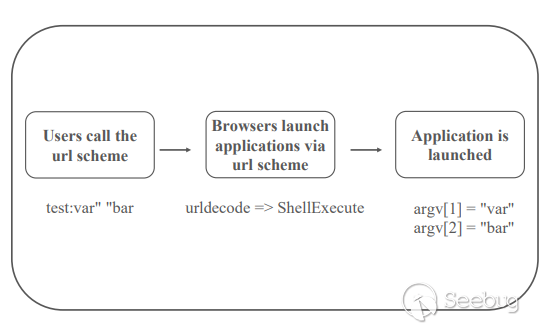 In January 2018, Electron released a security bulletin about the custom protocol command injection (CVE-2018-1000006). It is triggered by parameter injection, and the constructed PoC is as follows:

Access the link via IE browser, the final generated startup parameters are as follows:

Call the --gpu-launcher parameter supported in electron through parameter injection, and input cmd.exe, the calculator is started as shown below:

First of all, in the Edge, you can open some illegal url scheme (not include the URL Protocol field), such as the WSHFile item:

Of course, it cannot be opened under Windows 7 and Windows 8.

And the WSHFile item just points to wscript.exe. This application is very familiar, and it is a built-in script interpreter for Windows, then you can try to use WSHFile to run a script. In addition to the above mentioned problem of parameter injection in the Edge browser, is there a script that can receive parameters and be used for execution?

Finally, it’s found out that:

The script supports receiving parameters and splices commands directly into a string, and then executes them through powershell.

The final constructed PoC is as follows:

And the triggered results after execution are as follows:

A patch has been released on Windows10, and Edge is no longer able to call this illegal url scheme.

In addition, we also found a url scheme similar to WSHFile in the HKEY_CLASSES_ROOT registry, pointing to wscript.exe, which can also trigger remote code execution. These include:

What’s more, in C:\Windows\System32\ exists SyncAppvPublishingServer.vbs as well, which can also be exploited and even more reliable than what has been provided in the released bulletin.

PS: Under Windows 7, Chrome has the same features as Edge: some illegal url schemes can be opened, but Chrome has no problem with parameter injection, so it's temporarily considered to be safe.

In December 2017, the helpViewer application on MacOS was exposed a file execution vulnerability (cve-2017-2361) caused by XSS, affecting versions below MacOS Sierra 10.12.1. The vulnerability also exploits the url scheme, which allows an attacker to construct a malicious page to launch a remote attack. This is typical security issue of url scheme caused by the application.

For more details about the vulnerability, you can refer to: https://bugs.chromium.org/p/project-zero/issues/detail?id=1040&can=1&q=reporter%3Alokihardt%40google.com%20&sort=-reported&colspec=ID%20Status%20Restrict%20Reported%20Vendor%20Product%20Finder%20Summary&start=100.

The constructed PoC is as follows:

During the exploitation of this vulnerability, you can find that the operating system and the browser do not have problems, but the application opened through the url scheme has problems. Through the analysis of the exploitation chain, we can learn several clever tricks:

The convenience of url scheme comes from the mutual support of the operating system, the browser (or other applications that support urls), and the application. In order to ensure the security and reliability of url scheme, the security of these three parties must be firmly guarded.

In addition, different operating systems have different ways of implementing url scheme, different browsers have their own features, and applications have their own processing methods. As a result of multiple combinations, some unexpected security issues may occur.

Finally, I would like to appreciate @LoRexxar' and @dawu of Knownsec 404 Team for helping me.