On April 15, 2019, gitea was once exposed a vulnerability. It happened that I was curious about this vulnerability so I started to study it. The description of the vulnerability is as follows:

Studying with my friend @hammer, I successfully controlled the contents of git config, but I encountered difficulties in the process from git config to RCE, so I temporarily put it on hold. After a few months, I accidentally got the inspiration of @lz1y and @x1nguang, and I successfully reproduced this vulnerability. Now let's study this problem carefully.

First of all, according to the information of CVE, it's confirmed that the vulnerability is fixed in 1.7.6 and 1.8.0-rc3.

According to the information that the vulnerability file is repo_mirror.go, we can determine the updated commit, which are mainly #6593 and #6595.

According to the patch, you can roughly determine the key points of the problem.

When the repository is a mirror repository, the settings page displays the configuration for the mirror.

In the patch, the url option in the original modification configuration file is changed to NewCommand. It is easy to understand that the reason why change writing file to executing command must be because writing file is unable to fix this problem, which means that the url here can be wrapped by passing in %0d%0a and to cause other configuration changes in config.

Based on the previous logic, we firstly need to create a new mirror repository.

Capture the packet and modify mirror_address to the corresponding attribute.

You can pass in various configurations and control the contents of the config file.

More interestingly, if you update the sync settings, the server will also format the configuration.

However, what's more important is how to make further exploitation controllable from config file.

Firstly, the git server only keeps the contents of .git, not a complete git repository similar to our client, so it is difficult to introduce external files. Otherwise, RCE can be implemented by setting the hook directory. The key point of this idea is to find a controllable file write or file upload.

In git, there is a git Hook, which is used to execute the corresponding script when handling some operations.

In the web interface, git hooks are only managed by gitea administrators, so for the average user, you cannot modify the script directly by editing git hooks.

However, you can modify the directory where hooks are stored by controlling git config.

When we construct and send as follows:

The config file of the server becomes:

In this way, as long as we can write or create files anywhere on the server, we can set the hookspath there and trigger git hook to execute the command.

This file will not be cleared without restarting gitea, and this repo_id can be mined from other APIs.

For more detailed exploitation chain, you can refer to:

It is important to note that this approach requires knowing where the server is running, although we can assume that the "go" paths are similar and some people will choose to execute in the current compiled directory, it's still not quite reliable.

With the help of @x1nGuang, I reviewed some of the configurations associated with git config.

gitProxy is a command that needs to be executed when the git protocol requires fetch or other operations. It is a configuration option for dealing with special scenarios. It is generally applied to scenarios where a proxy application is required when git requests.

Here we set the server as follows.

It is important to note that the synchronized url must start with git.

However, the problem is that because gitProxy in git design is to execute a proxy application, whatever is input will be executed as an application, and there is no way to take parameters.

In such case, it has been greatly restrained in the actual exploitation scenario. Here you can try to upload a bin by means of the upload file function in the normal project, then grab the package to get the file path, and finally execute the backdoor through gitProxy.

Again, this approach is still restrained to gitea's running directory, but compared to the previous exploits, the version 1.8.0 can also use this approach to implement RCE.

Another configuration in git's documentation is sshCommand.

This is a system that allows git fetch/git push to connect to the remote end via ssh with special configuration in git, which has been mentioned in the blog of @Lz1y as well.

We set sshCommand to be the specified command.

Then set the protocol to save for ssh and click Sync. 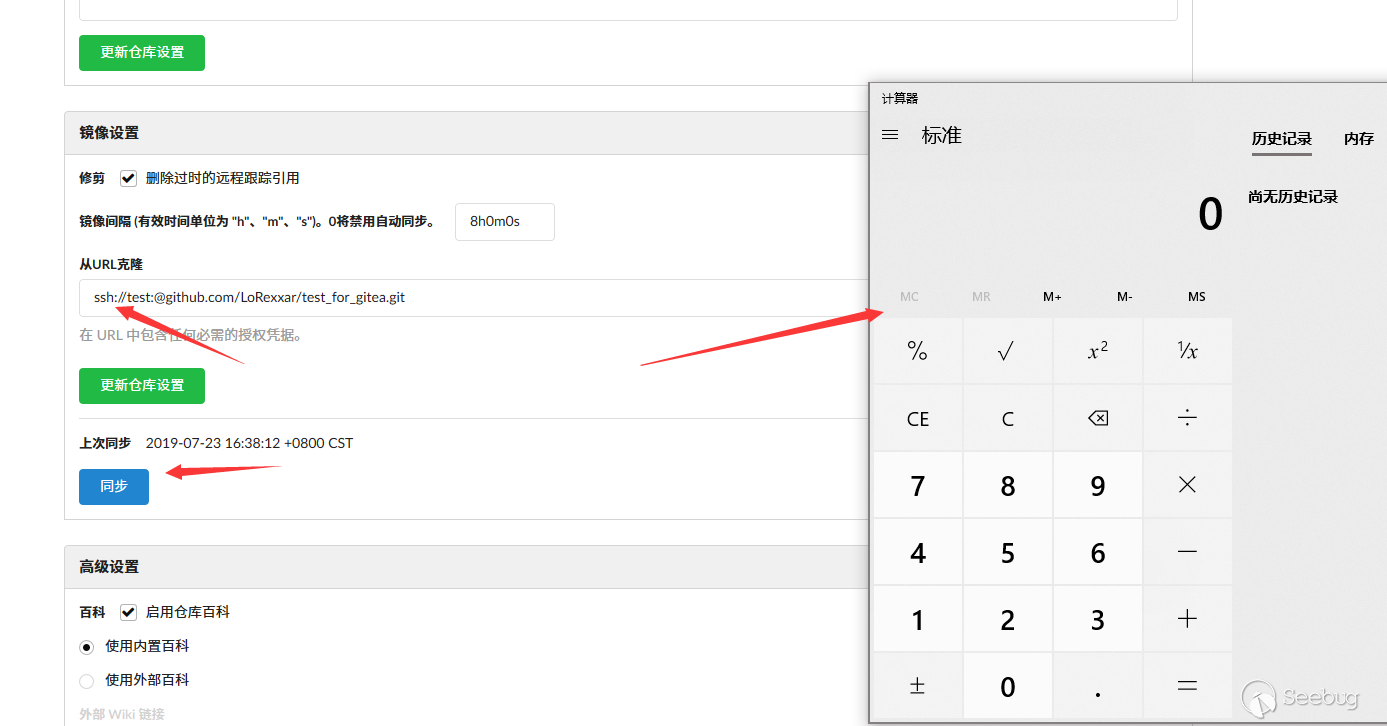 Unlike gitProxy, here can be followed by parameters.

This is a very special example of the vulnerability in the platform like git. Due to the difficulties I encountered in researching the exploits of git config, it has taken a long time to write this paper. The whole vulnerability exploit chain and git feature have strong dependencies, which is kind of an interesting experience. I hope to explore an interesting vulnerability when I take a closer look at the code of the gitea, gogs, and gitlab.